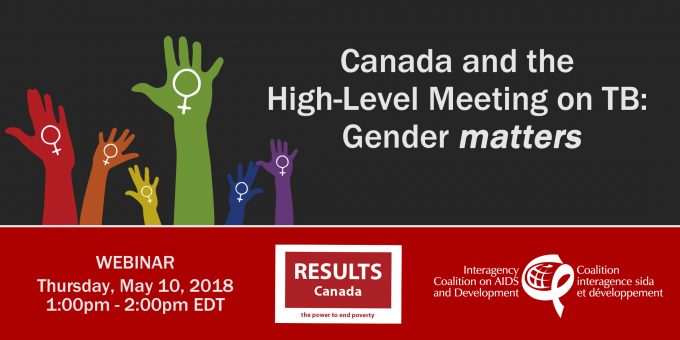 Why does gender matter in the fight to end the TB epidemic?

How does TB affect women and maternal health?

Gender is a key priority for the Canadian government, how can Canada take a leadership role in the TB response?

What role does Canadian civil society have to play?

Gender is an area often neglected by those seeking to end the TB epidemic. While men tend to disproportionately contract the disease, TB has a significant impact on women worldwide. TB is one of the top five leading causes of death among women aged 20-59. In some regions such as Sub-Saharan Africa, these numbers are even higher, where TB is the third leading cause of death for women.

While the international community is starting to acknowledge the importance of addressing women and TB, few models, best practices, or funding schemes support TB interventions that meaningfully engage or focus on women. Canada has solidified its position as a global leader on promoting gender equity through its Feminist International Assistance Policy. To continue its commitment, Canada can ensure it takes a leadership role at the upcoming UN High-Level Meeting on TB so that moving forward, better consideration of gender dimensions can help to improve the prevention and treatment of TB on a global scale.

Speakers:
THE HIGH-LEVEL MEETING ON TB:
Tuberculosis (TB) is the world’s leading infectious killer, claiming 1.7 million lives every year. Our global progress to fight the disease is off-track and requires serious and dedicated global political leadership. In September 2018, the United Nations (UN) will hold a high-level meeting on TB. The UN High-Level Meeting (HLM) on TB is a crucial opportunity to bolster and align world leaders’ commitments to tackling TB. With TB the primary cause of death of those living with HIV/AIDS, the impact that the HLM will have is significant not only for the TB community but the HIV community.