Grandmothers are the key support structure for children in Lesotho and are essential to their survival. Many of them have lost their own children and family members to HIV/AIDS, leaving them confused, lonely and grief-stricken.

Despite their own poverty, illnesses and hopelessness, grandmothers have opened their homes and hearts to Lesotho’s orphaned children, filling the role of parents and guardians. They have the burden and the unique opportunity to support their grandchildren to become educated young leaders.

One such grandmother (‘nkhono’), Nkhono ‘Mafese’s life has been a series of tragedies. She became a widower after 20 years of marriage when her husband contracted Tuberculosis from working in … END_OF_DOCUMENT_TOKEN_TO_BE_REPLACED

By Laurie Edmiston, CATIE Earlier this year, I witnessed a profound historic moment at the International AIDS Conference in Amsterdam. Dr. Alison Rodger, a leading HIV researcher in the United Kingdom, presented the final results from a study of couples with one HIV-positive and one HIV-negative partner. After eight years of the study, she reported, there were zero cases of HIV transmission from one partner to the other – thanks to the prevention benefits of modern HIV medications. The evidence has been mounting for years. Several large clinical trials have confirmed that HIV treatment can suppress the virus so successfully that sexual transmission doesn’t occur. Three-quarters of Canadians diagnosed with … END_OF_DOCUMENT_TOKEN_TO_BE_REPLACED

International Rectal Microbicide Advocates (IRMA) and our many partners and allies believe we need an array of HIV prevention options. There has been enormous progress in the field of HIV prevention research in recent years. The remarkably high efficacy of antiretroviral drugs (ARVs) for prevention has been demonstrated, both for oral pre-exposure prophylaxis ( PrEP, now approved and subsidized in several countries ) and through treatment leading to viral suppression or “undetectability” ( U=U, Undetectable = Untransmittable ).

By Jes Hovanes, Communications and Social Media Officer, CIHR Canadian HIV Trials Network There is a line in Tony Kushner’s 1991 play Angels in America where, in the early days of the HIV epidemic, the character Belize, a nurse working in the AIDS ward in New York, warns Roy Cohn, who is dying of AIDS, to “watch out for the double-blind. They’ll want you to sign something that says they can give you M&M’s instead of the real drug. You’ll die, but they’ll get the kind of statistics they can publish in The New England Journal of Medicine…” Thankfully, this portrayed gap between the interests of medical researchers and the … END_OF_DOCUMENT_TOKEN_TO_BE_REPLACED 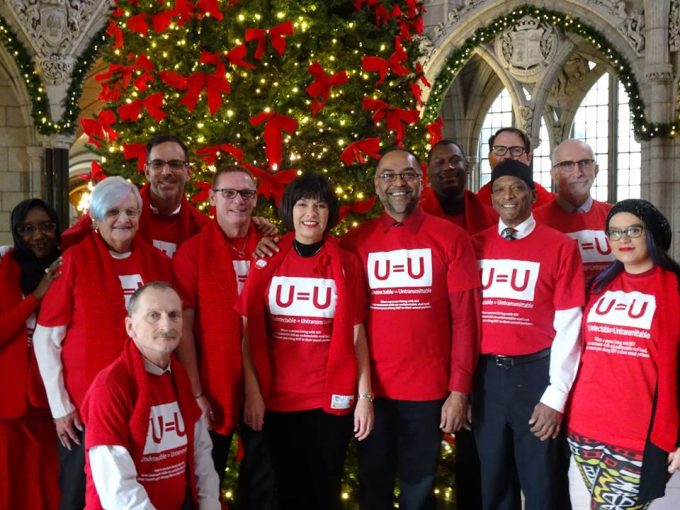 By Jeff Potts (with permission) To suggest, on this 30th World AIDS Day (and for me personally, the 28th), that I am not profoundly overwhelmed or just a little bit exhausted would be disingenuous to be sure. I stood alongside and with some of the most-amazing, history-making people today, at the foot of Centre Block where I witnessed and was part of the most incredible moments this country’s HIV community has ever experienced. I was truly wiped when I got home… it was the most exhilarating kind of tired I’ve felt in a very long time. Today, the AIDS Committee of Ottawa kept its promise to leave an indelible mark … END_OF_DOCUMENT_TOKEN_TO_BE_REPLACED

By Robin Montgomery, Executive Director, ICAD Today is December 1 – a day when communities around the world commemorate World AIDS Day with efforts that celebrate our successes and pause to remember the millions who we have lost the fight against HIV. World AIDS Day also offers us opportunity to reflect, to re-calibrate, and to mobilize with increased force towards our collective Global Goal to end HIV as a public health threat by 2030. …sirens are blaring with warning that the world is off-track… like, way off track. This year’s World AIDS Day is unlike those that have come before. Today recognizes the 30th anniversary of World AIDS Day. Yes, … END_OF_DOCUMENT_TOKEN_TO_BE_REPLACED