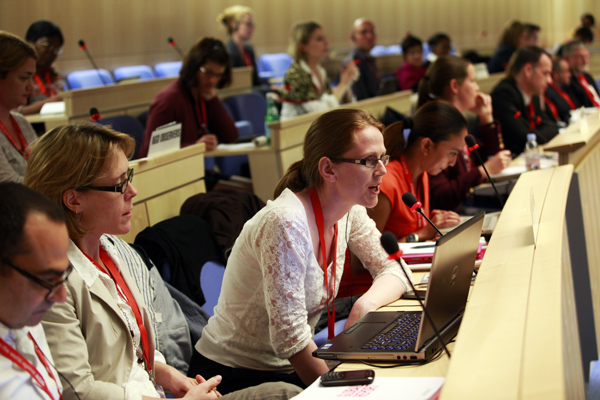 This statement is made on behalf of a loose coalition of NGO Observers including the Stop AIDS Alliance, Interagency Coalition on AIDS and Development, Elizabeth Glaser Pediatric AIDS Foundations and the Ecumenical Advocacy Alliance – Addressed by Ruth Foley

We acknowledge UNAIDS’ role thus far in positioning HIV within the post-2015 framework, including the work of this PCB’s working group, and we echo the call from India this morning that HIV have its own goal in the post-2015 agenda. And we look forward to working alongside the members of the UNAIDS and Lancet Commission to produce strong outcomes that provide new momentum and insights to realizing the dream of an AIDS-free generation.

However, we now urgently call upon on UNAIDS, its co-sponsors and the UN member states represented on this Board to ensure that the clarity and strength of universal access commitments on HIV to-date are also safeguarded and built upon within all other forums that will influence the post-2015 framework.

A notable opportunity includes the intergovernmental discussions currently taking place within the UN General Assembly Open Working Group on Sustainable Development and its report to the High-Level Event on the MDGs.

More specifically, we call upon member states in the Open Working Group to work towards the formulation of a strong, outcome-focused health goal in the post-2015 Sustainable Development Framework with concrete and measurable targets and indicators that address access and the social determinants of health.

We urge the OWG to emphasize the need to complete the unfinished business of the MDGs, and to focus on the key drivers of the HIV pandemic, including eliminating extreme poverty, preventing violence against women and girls, realizing human rights for all, and promoting universal non-discriminatory access to sexual and reproductive health especially for young people.

To address the significant challenges that we still face in achieving universal access to HIV prevention, treatment, care and support, especially for key affected populations including people living with HIV, children, women and girls, men who have sex with men, transgender people, sex workers and people who use drugs, significant investment and commitment from the global community is needed well into the next decade for prevention, diagnosis and treatment of HIV and its major co-infections, including tuberculosis and viral hepatitis, as well as for accelerating science and innovation, vaccine development, and biomedical research for new prevention technologies.

In conclusion, we believe that it is only with such advocacy and commitments from the members of this Board and its co-sponsors that we will be able to accelerate our efforts to achieve the current MDGs and to develop a strong and ambitious post 2015 agenda, which will help achieve the three zeros for which this Board strives.