Are you ready to donate? 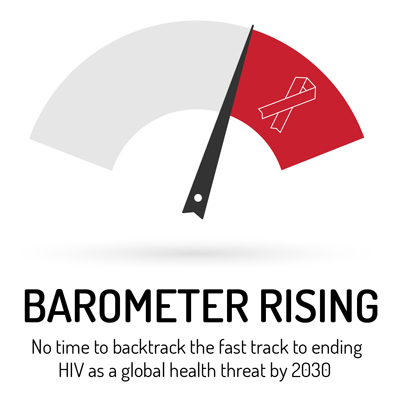 The Barometer is Rising: Let’s Step Up to the Challenge!

Significant progress has been made worldwide towards curbing the HIV and AIDS epidemic in Canada and abroad. Millions of lives have been saved. But it’s too early to celebrate.

37 million people worldwide are living with HIV, of which 75 500 live in Canada. While in some areas of the world we have been able to bend the trajectory downwards in new HIV infections, those at greatest risk of HIV, those who are often the most vulnerable and poorest in society, continue to face the greatest hurdles barring access to timely, quality and affordable prevention, treatment, care and support services. In the case of Canada, as in many corners of the globe, one of the most vulnerable and underserved populations is the youth population. Over one quarter of new HIV infections in 2015 in Canada were among youth, representing a 17% increase since 2014. Worldwide,  AIDS is the second leading cause of death among young people ages 10-24, and it is the leading cause of death for this age group in Africa. Empowering young people to make informed decisions and to access timely, culturally safe prevention and care in Canada and abroad is a pressing urgency if we are to meet our global target of ending AIDS as a public health threat by 2030.

The Global Goals for Sustainable Development (SDGs) together with the United Nations Political Declaration on HIV and AIDS (2016) set out the blueprint to ending the AIDS epidemic as a public health threat by 2030.  We must strengthen our youth programming and youth-friendly service delivery, our advocacy, as well as our support to poor and vulnerable communities to reach this goal. Young people will be the ones to eventually end the battle against HIV and AIDS.

The stakes are high. Inaction is not an option. Let’s do our part. The barometer is rising.

Canadians have a role to play: The Interagency Coalition for AIDS and Development (ICAD) brings together the Canadian HIV community, Canadian international development organizations and many other partners and allies to ensure that we do just that by learning from experiences of the global response to HIV to improve HIV prevention, care, treatment and support locally, and by sharing Canada’s ground-breaking best practices and lessons learned to contribute to the global response. ICAD looks to further advocate for and improve programming around youth both in Canada and worldwide. We have a road map on how we can accomplish the end of AIDS together. At ICAD, young people have an integral influence in our response to the HIV and AIDS epidemic. By having a voice in the organization and on the board of directors, we not only seek to serve this population but to engage them in leadership roles, and decision-making and agenda-setting processes to end HIV as a public health threat by 2030. Let’s assemble from coast to coast to coast as caring Canadians focusing on improving our communities by engaging our young people as a tremendous source of energy, creativity and innovation that drive solutions. Ending the epidemic is not a one-person solution: to go far with our actions, we must work together. Join us and Canadian youth in empowering the next generation to continue and finish the battle against HIV and AIDS: